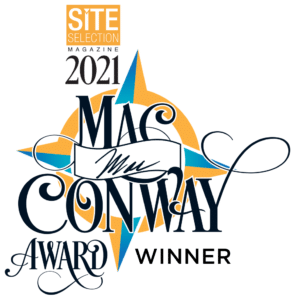 “Over the last year, LEAP transformed into a small-business relief agency while also continuing with our traditional economic development work,” said Bob Trezise, president and CEO of LEAP. “Yet, even amid a global pandemic, LEAP successfully competed to draw new investment and new jobs to the region. We are honored to be recognized by Site Selection Magazine as a national economic development leader. Economic development is a team sport, so this recognition is a great chance for LEAP to once again share all of the credit with our LEAP members and say thank you to our critical state and local partners.”

Tim Salisbury, PNC bank regional president and current LEAP board chair added, ”I am proud of the great work being done in the region and am thankful for the work done by the LEAP team.  Their commitment to our community is truly making a difference. This recognition is the latest acknowledgment of those efforts.”

Also ranked are competitor communities analyzed in the recently released State of the Lansing Region Benchmarking Report, including Indianapolis, IN and Columbus, OH. Trezise noted this comparison validates and increases the importance of acting on the report’s insights, stating, “As someone who loves a good sports analogy, this award is further evidence that we are graduating from the minor leagues and headed to the majors. There is a lot of work being done and a lot still to do, and we have to focus on facilitating and bringing some of it together to get people working in tandem.”

Site Selection Magazine has been a trusted advisor to corporations, government economic development and investment promotion agencies worldwide for more than 70 years. The annual Mac Conway Awards for Excellence in Economic Development are awarded to the top local and regional U.S. economic development groups based on an index of corporate job creation and facility-related capital investment data calculated both cumulatively and per capita.

“There may never have been a more challenging year than was 2020 for those who work in the vital field of economic development. As businesses reeled and supply chains shuddered, this singular group of professionals stepped forward to help steer communities through the pandemic, the battle against which remains unfinished,” said Site Selection Senior Editor Gary Daughters.

In addition to the Mac Conway rankings, Michigan landed at number ten on Site Selection Magazine’s annual Prosperity Cup rankings. This designation ranks the most competitive states on an index of 10 criteria, including project, capex and job creation data from Site Selection and data from the Tax Foundation, ACT and Beacon Hill Institute.

“Michigan and the Lansing region are at a turning point. We have been working doggedly to stabilize our economy during this crisis. Still, we cannot afford to take our eye off the ball and must continue to focus and organize around our successful growth into the future.” Trezise added.