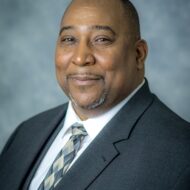 Owen Monday Jr. currently works with the State of Michigan and became the Vice President of Public Relations of his local area Toastmasters in 2018, which he joined in April 2017. Owen currently holds the title of Area Director of four Toastmasters clubs in the Lansing Chapter. Owen also holds the title of President of Secondary to None and is also a member of the Black Speakers Association. Owen has also previously mentored youth at the YMCA and young men at the Boys and Girls Club.