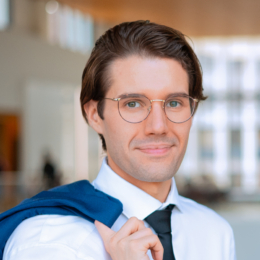 Harrison Leffel-Jones serves as the Development Director for the Lansing Regional SmartZone. In his role, he focuses on delivering and coordinating services to help businesses grow within and out of the East Lansing Technology Innovation Center (TIC) in coordination with LEAP, the City of East Lansing, the City of Lansing, and the MSU Foundation.

In his economic development career, Harrison was part of the founding team that opened the Midwest regional office for London & Partners (the Mayor of London's promotional and economic development agency), where his role was to help businesses open and expand operations to London. In addition to his work in the US, Harrison moved to London to support the Mayors International Business Programme, which focused on assisting fast-growing London-based companies in expanding operations to China, India, the EU, and North America through fundraising, corporate innovation programs, and mentorship.

Most recently, Harrison served as Chief of Staff at May Mobility - a Series C, 200+ person company in the autonomous vehicle space based in Ann Arbor, Michigan. He is incredibly proud to be returning to LEAP and supporting the growth of the Lansing region and the future of the SmartZone.