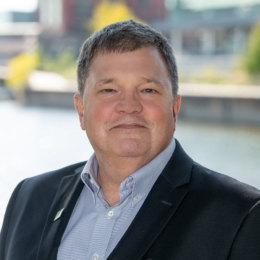 A native of Lansing and graduate of Lansing Sexton High School, Karl has more than 20 years of experience in helping the city and greater Lansing region meet major economic challenges over time.

The Lansing of his young formative years was an idyllic world of easily available, high-paying manufacturing jobs that allowed direct access to a secure and safe middle-class life. However, upon graduating from Michigan State University, the unemployment rate in Michigan had risen to double digits and Karl moved to the state with the highest job growth rate in the nation, Alaska.

While living in Alaska, Karl worked in the construction industry in the warm sunny summers and earned a Master’s degree at the University of Alaska - Fairbanks during the long, cold winters. After earning his Master's degree, Karl returned to Lansing and began work at the Tri-County Regional Planning Commission (TCRPC) at a time when greater Lansing faced big economic challenges.

While at TCRPC, Karl created and implemented a regional economic development plan for the Lansing area that highlighted and coordinated the development efforts of the region’s many cities, townships and villages. The plan promoted the idea of regionalism and partnership, rather than competition between communities for limited economic activity, residents and tax dollars.

After his time at TCRPC, Karl worked for Capital Area Michigan Works!, where he learned about workforce development and the critical role it plays in the growth and success of business. He then moved on to the Lansing Economic Development Corporation (LEDC), where he became an experienced economic development professional taking on the challenges of retaining, attracting and expanding businesses in Lansing. He also became an expert in brownfield redevelopment with the Lansing Brownfield Redevelopment Authority to transform many vacant, historical, contaminated and underutilized properties in Lansing.

After great success at the LEDC, Karl made the move to work for the Lansing Economic Area Partnership (LEAP), where he was able to utilize both his regional and local economic development experience. Karl has pioneered the use of public/private partnerships, economic incentives, complex financing structures and creative development agreements to find solutions that equitably share both the costs and benefits of economic development among businesses, government, workers and citizens.

Through it all, Karl has learned that what really matters is improving the lives of people by creating good job opportunities, strong businesses and great places to live and enjoy life.