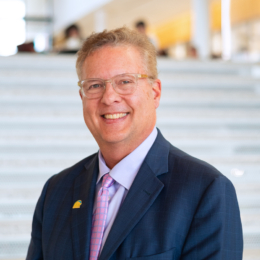 Bob Trezise has been President & CEO of the Lansing Economic Area Partnership (LEAP) since 2011, representing the Lansing, Michigan region (Clinton, Eaton and Ingham counties) with an MSA population of over half a million.

Beyond LEAP, Bob has been leading or guiding the city of Lansing’s economic development efforts since 2006, having served as president and CEO of the Lansing Economic Development Corporation (LEDC) from 2006-2011 and leading LEAP’s contract for economic development services with the city of Lansing since 2011. LEAP manages the city’s Brownfield Authority, Tax Increment Finance Authority, Corridor Improvement Authorities and LEDC programs and board of directors through this contract. Under Bob’s leadership and guidance, the city has experienced massive revitalization ranging in the billions of dollars, thousands of jobs created and eight straight years of population growth.

In 2011, Bob received the Michigan Economic Developer’s Association (MEDA) Economic Development Medalist of the Year award and, in 2016, received MEDA’s prestigious President’s Award. Bob’s projects have also, seven times, received the International Economic Development Council’s (IEDC) Gold and Silver projects of the Year awards. Bob’s pinnacle project, the $182 million revitalization of the long-abandoned, downtown Lansing riverfront “Power Station” into a national corporate headquarters, won the National Brownfield Association’s Region 5 Phoenix Award and was the National #1 Runner Up winner. Bob was honored to be selected as one of North America’s 50 Top Economic Developers in 2020 by Consultant Connect, a leading consulting agency focused on bridging the gap between economic developers and site consultants.

In the early days of Bob’s long-standing economic development career, he served as the Managing Director and creator of the Michigan Economic Development Corporation’s Community Assistance Team (CATeam) from 2001 – 2006. Additionally, Bob is the founder of the Michigan Main Street program and worked on hundreds of community revitalization projects across Michigan. Additionally, Bob served as vice president of the Lansing Regional Chamber of Commerce (LRCC) board and Director of Delta Township’s economic development department. In both roles, Bob was part of the successful Keep GM campaign.

LEAP is a unique and diverse economic development organization with an impact portfolio ranging from brick-and-mortar developments and massive business attraction projects to management of Ingham County’s economic development efforts and the region’s SmartZone (LRSZ) to delivering robust entrepreneurial programs; diversity, equity and inclusion initiatives; and placemaking programs, including creating and supporting the Lansing Poet Laureate program, LEAP’s flagship inclusive entrepreneurship program One and All.

Bob grew up in the city of Lansing, is married to Kerri and they have four children. Bob is a proud graduate of the Lansing School District, James Madison College at Michigan State University and the Public Administration/Public Affairs Graduate program at Western Michigan University. He is also a published poet.