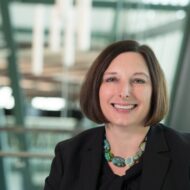 April Clobes has been the President and Chief Executive Officer of Michigan State University Federal Credit Union since March of 2015. She joined MSUFCU in 1996 and moved through the organization from a marketing specialist to management and executive positions prior to being named President/CEO.

Ms. Clobes has a Bachelor of Arts degree in Marketing from Michigan State University, a Master of Arts degree from Michigan State University in Advertising, and a Master of Business Administration from Western Michigan University. She has earned several awards, including Top Woman to Watch by the Credit Union Times in 2013; the Detroit Free Press Leadership Award in 2016; the ATHENA award from the Lansing Regional Chamber of Commerce and an Honorary Alumni Award from Oakland University in 2017; and the Detroit Free Press Top Workplaces Leadership Award in the large category group in 2018.

Ms. Clobes is an active leader on several industry, community and university boards. She is currently a member of the Executive Committee and is chair of the Board of Directors for the Lansing Economic Area Partnership and is Chair of the Lansing Symphony. Additionally, Ms. Clobes serves on the MSU College of Music National Leadership Council, Eli and Edythe Board Art Museum Advisory Board, MSU College of Business Alumni Board, and Oakland University’s Campaign Steering Committee. In 2018, she was appointed by the Governor of Michigan to the Michigan Humanities Council. Ms. Clobes is a board member of Trellance and the Filene Research Group.